skip to main | skip to sidebar

A homestone is a lot of things it is anything a tent a building a cottage a
single home a small village or a large city. It is also a place you call
home a place where all your family and friends are.

So a homestone is a home there is a saying "every Englishman’s home is his
castle" this is really if you look at it an indication of what earth people
see as what is there to protect and defend with all they have. To a Gorean
that is too insular. Their home their castle is the city and village they
belong to the whole of it not just the building they call home at that time.

A homestone is more than that another earth saying is "home is where the
heart is" Well to the Gorean the homestone symbolises the heart. The heart
of the city or village they live in. and it is seen to be the centre, the
very core of each. In Gor people men and women a like would die for their
homestone would kill for it they had total loyalty and would defend all that
it encompassed as with a city that would be all in the land that belonged to
that city. Think back on what you know and have heard of what life was like
in medieval times the loyalty to the lord of the manor. That is Gor loyalty
to the homestone.

If they were attacked all would contribute with everything they had none
would back away and refuse none would lock themselves inside or run for the
hills to hide when troubles came. No matter what troubles hit that homestone
the people stood together side by side shoulder to shoulder the loyalty the
passion they felt is something not known to many people on earth and yet
they yearn for that kind of community. It is I guess akin to the fighting
for your country, each city in gor is a small country run autonomously from
the next each a small kingdom within itself. Women would take up a weapon in
some cities to defend the city and in others would cut their hair donating
it to the city

It is so difficult to explain what a homestone meant to the people of Gor
mostly because it was an emotion so deep an abiding love a loyalty when the
people of the city spoke of their homestone to those outside it, it would be
said with such emotion drawn from deep inside of them. They were proud to be
a part of it and yes I will repeat would die for it.

The women were respectful and behaved with decorum the men treated them with
the honor and respect they deserved. True they were only free at the mans
will but a true FW was held in high regard. Men did not do anything within
the city that would bring disrespect to it. They had honor and all citizens’
man, woman low caste high caste behaved with the honor, integrity and
loyalty to the homestone and their codes. Anything other would see them
ejected from their caste and in cases from their city they would be seen as
a pariah an outlaw not worthy and to a Gorean this was unthinkable.

Goreans weren’t fair-weather warriors or citizens there homestone was theirs
and if there was something wrong they worked to correct it. In times of
peace a city was ruled by an admin in times of war by an Ubar. Think of it a
little like martial law *smile* in times of trouble some one skilled in
battle strategy etc would be chosen in times of peace a man of diplomacy.

This is not to say there weren’t disagreements or squabbles amongst the
people, of course there were it is the natural order for people pulled
together in this way with a common love and differing perspectives to fall
out and disagree. But when time of need arrives they stick together
supporting defending and protecting each other in any way they can. A
warrior would stand alone day after day on guard ready to defend his city.
If a city was struggling or lost people in a raid or due to illness those
left would fight harder to ensure the homestone grew back and didn't
disappear into oblivion.

This is what TGG is a series of homestones as true as any on Gor. A place to be proud
of, a place to swear allegiance too. Its people honorable and with
integrity, people that hold the values of Gor in their hearts and
are proud to call it their home. People that will show respect and stand
strong and proud helping to uphold the laws protect and defend against all
trials battles raids illnesses or losses. People that don't give up belief
in the vision of what can be but stand by it no matter what.

If you can do all this if you can believe in a homestone a true Gorean
homestone show true honor integrity and loyalty then TGG welcomes you
Posted by Astorette at 2:04 PM 2 comments:

The City of Piedmont 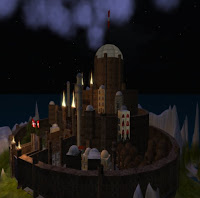 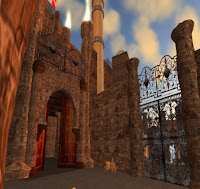 Little is said of the City. This is probably due to its remote location and that once travellers have found it, they find no good reason to leave. The City is totally self sufficient in all its needs. The Plains provide fertile lands for growing crops and the feeding of livestock. Water is in abundance, and arrives fresh from the mountains that th 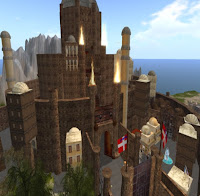 e City is built into. Within the City itself there are tradesmen that produce all that the citizens require, including food, clothing, weapons, buildings, etc. There are also hidden gardens where fruits and root vegetables are also grown.

On occasion, throughout the year, the nearby City and Port of Cardonicus will send Merchants with Slaves and goods to trade or sell. The Auction rooms are a hive of activity during this time as the Free Citizens try and out bid each other for the new arrivals.

Also located within the City are Auction rooms, well stocked Library, Taverns. Public and private baths, Medical Facilities, In fact, all the things a major City should have.

The City is mostly circular in design and is surrounded by a large reinforced wall for two thirds and the Mountains provide a barrier for the final third. Within the Main walls the City is constructed in Tiers, each Tier supporting its own buildings and areas. The dwellings and buildings can be found on these tiers and in some instances they actually overhang the inner walls, providing a rather unique living space.

The structure has also been designed for maximum security. Indeed, at a moments warning, each Tier can isolate itself from any others below it or above it, minimising the chances of total invasion. It is rumoured that there are many hidden and secret passages that weave their way in, through and under the City.

My name is Sullius Sevarius. I write this account so that others might venture to Piedmont and see this wonderful City. I am a Master Builder and have been employed to rebuild the damaged parts of the Cities of Piedmont and Cardonicus. Both recently partially destroyed by an earth tremour. Please feel free to come and visit, or possibly stay in Piedmont. There are many positions available within the City and all are welcome.

You may contact me directly if you need more information…..Now I must get back to my work, there is much to do. Sullius.
Posted by Astorette at 11:55 PM No comments: 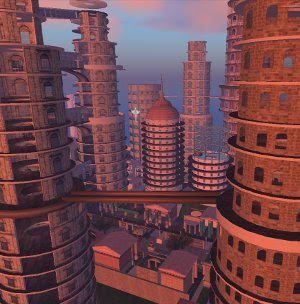 Situated in the South Vosk region, Ar was described in the books as follows: "The largest, most populous, and the most luxurious city of all known Gor" Assasins of Gor

Ar has been built with care and dedication to the descriptions in the books as well as giving an atmosphere of a real city with a wide variety of styles and areas from slums to the most luxerious high caste buildings.

It is truly *Glorious* and well worth a visit, only be careful not to get lost in its many bustling city streets. Explore its slums, search out its many taverns and brothels , take a bath in one of the many pools at the Capacian Baths or simply stroll down Ars great avenue and admire the wide variety of goods on sale.

Tarn riders beware, while Ar is a spectacular sight from tarn back... there are many tarn wires protecting its citizens and only specific places a tarn can land. However your way will be guided into the city over the walls by the huge fires built each night on the towering walls of Ar.

If you wish to take up residency in this amazing city please contact Donatelle Rossini, Breezy Kanto or Astorette Novi
Posted by Astorette at 4:20 PM No comments:

First of all I am happy to announced that now i have 3 assistants. Sullius Sevarius, Astorette Novi and Tessa Moreaux. If you need any help or need to reach me you may contact them.

Beside that we need more helpers to fill out the shift table. The helpers will also be paid by parcels in TGG. If you have time to make your gorean world better, send your applications to deoria.delpiaz@thegorgrid.com.

Hey all residents. We started to populate Black Stone Town. So we are looking for blackmiths, phsicians, scribes, kajirae, warriors and more. Do not miss the opportunity to have free housing and your free RP shop.

Beside that The Gor Grid Tech. is working so hard and managed to fix the texture problem. Now you can see all clearly.

As The Gor Grid Team we are planning to make another free town to the vosk area. After we manage to build it we will also start to populate. We are open for name ideas.

And I need to tell you that Cairo has left TGG team because of his RL. He is so busy to take care of TGG. We wish you luck in your RL Cairo.

Now we have a group on facebook created just for The Gor Grid. You can write "The Gor Grid" on the search or you can go directly to the page http://www.facebook.com/home.php?ref=home#/group.php?gid=127070683958 . Now you can know all updates about TGG from facebook.

I wish you all well
Posted by Oya at 9:22 PM No comments:

The Gor Grid opened the doors of Black Stone town for RP. For the moment it has Azah Tabor as Administrator and her companion Tayla Tabor.

Black Stone Town has a difference from the other towns and cities. It is an open town that can be raided and taken over. It is owned by TGG and open for all roleplayers.
Many thanks to Darcain, Azah and Tayla for their effort to make TGG more realistic roleplay area. If you want to be a part of Black Stone Town please contact Azah Tabor or Tayla Tabor.

I wish you most well...
Deoria Delpiaz
Posted by Oya at 2:05 PM No comments: